In a world of 90-minute diner time limits and spillover street seating, the supper series feels like a return to intimacy. The concept is simple enough: an immersive dinner intended for a small number of guests that’s rooted in storytelling and connection. I learned this during a recent meal at Dept of Culture in Bed-Stuy, a Nigerian restaurant that debuted this year and received a not-so-subtly rave review from The New Yorker. Upon publication of said review, reservations were swiftly snatched up (there are 6 and 8:30 p.m. seatings Wednesday through Saturday) but after a few months of patiently waiting, I was in.

Dept of Culture was born out of owner-chef Alo Balogun’s IYA EBA popup dinner series, and is now a tasting menu in a similar spirit. “The idea was to serve Nigerian food with dignity, the way I ate it. I try to take people back to the ‘80s, which is one of the reasons we have vinyl,” he tells me. In fact, the record spinning 1970s Afrobeat is the first sensory experience I have when walking inside; that and the large communal oak table in the center of the room, which I respond “yes” at full tilt when the host asks if I want to be seated at the head of it (being embarrassingly early has its perks). 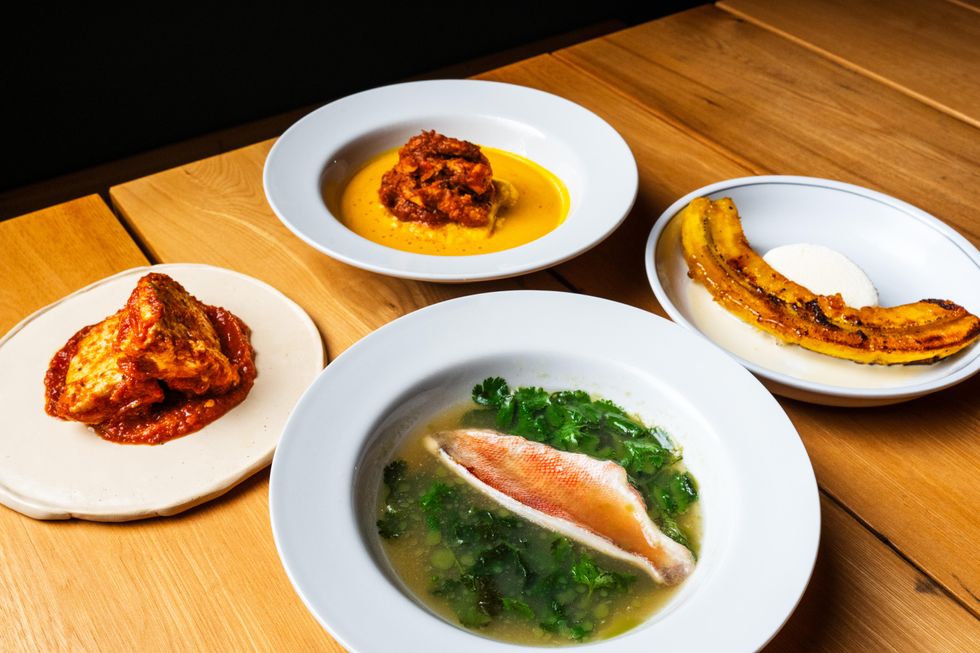 There are collages by Tiffany Webber, brightly-colored paintings by Naomi Sarah Clark, and photographs of his relatives in Nigeria hung on the walls, which he explains in detail to us later in the evening. But from the outset, the message is clear: this two-hour dinner series is going to change the way you view food. “There is an African proverb, ‘it takes a village to raise a child.’ We built a communal table and it makes people form a village every night,” Balogun says. “People sitting arm to arm with one another, sharing a similar experience, sometimes for the first time. It’s almost magical. By the end of the first or second course everyone has bonded and they are friends.”

It’s true. I chatted with the woman to my left about her career as a chef for a major NBA player (no, she didn’t spill the tea) and to my right, my boyfriend had made fast friends with a couple who recently moved to the city from San Francisco. Also, Chef Alo breaks the barrier between kitchen-and-customer throughout each of the four courses’ presentations, sharing recommendations and nostalgic stories (like the one about how he was so cute as a kid that everyone asked him to be their ring bearer, regardless of family relation). You just don’t get that at most dinners. 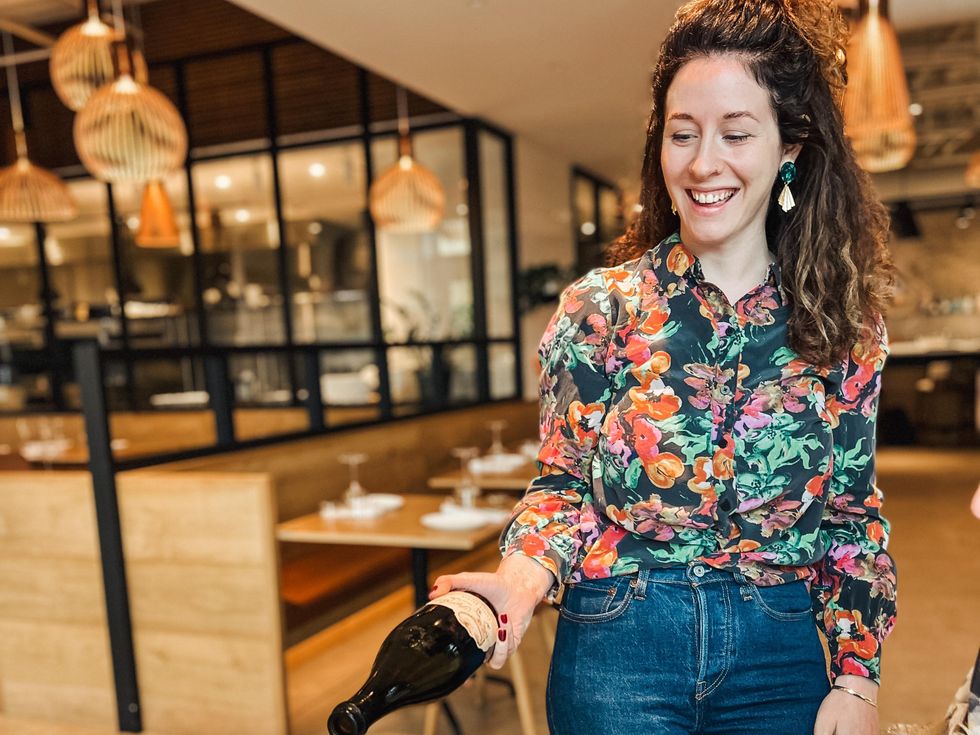 Photo: Courtesy of The Duck & The Peach

In Washington D.C. at The Duck & The Peach, wine director Danya Degen is following a similar script with her Womxn in Wine dinner series. “Being a guest at our dinners is transportive and experiential. The dinners remind me of living in New York and attending an artist’s gallery opening,” Degen says. The series spotlights wine crafted by womxn makers and owners with dinner pairings by Chef Kat Petonito and Pastry Chef Rochelle Cooper. “There’s something beautiful about like minds coming together to drink wine and eat delicious food. Our guests who attend our womxn in wine events actively choose to drink womxn-made products,” she says. “They’re coming into our home with an active desire and hunger to learn more about what they’re drinking and how its maker created it.”

The dinner series emerged from conversations Degen and the woman-owned and operated staff at the restaurant were having with each other and guests. “In featuring womxn makers and owners, we found that our guests want to learn more about their stories. As sommeliers, we’re storytellers, but the best way to get to know a wine is through its maker.” 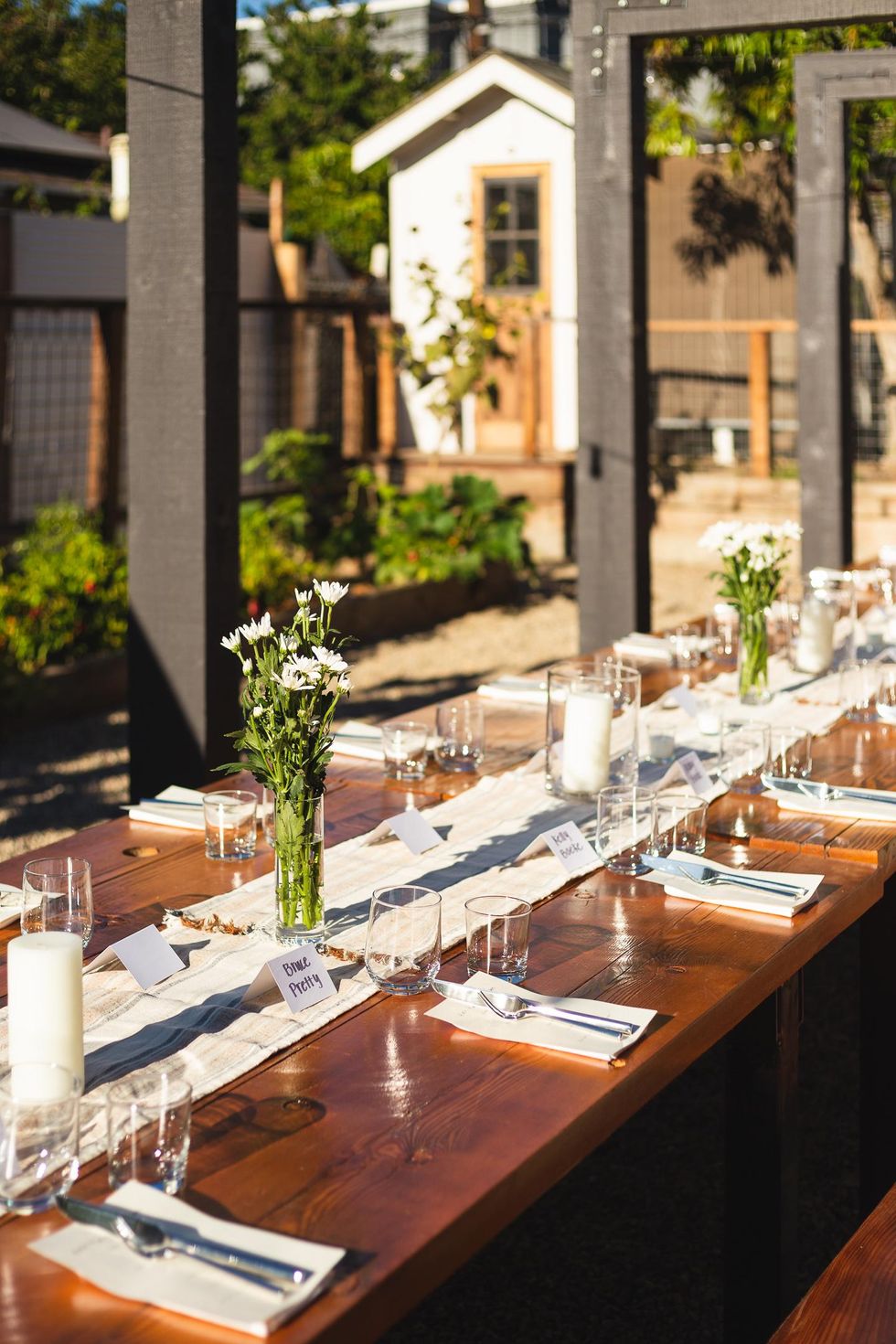 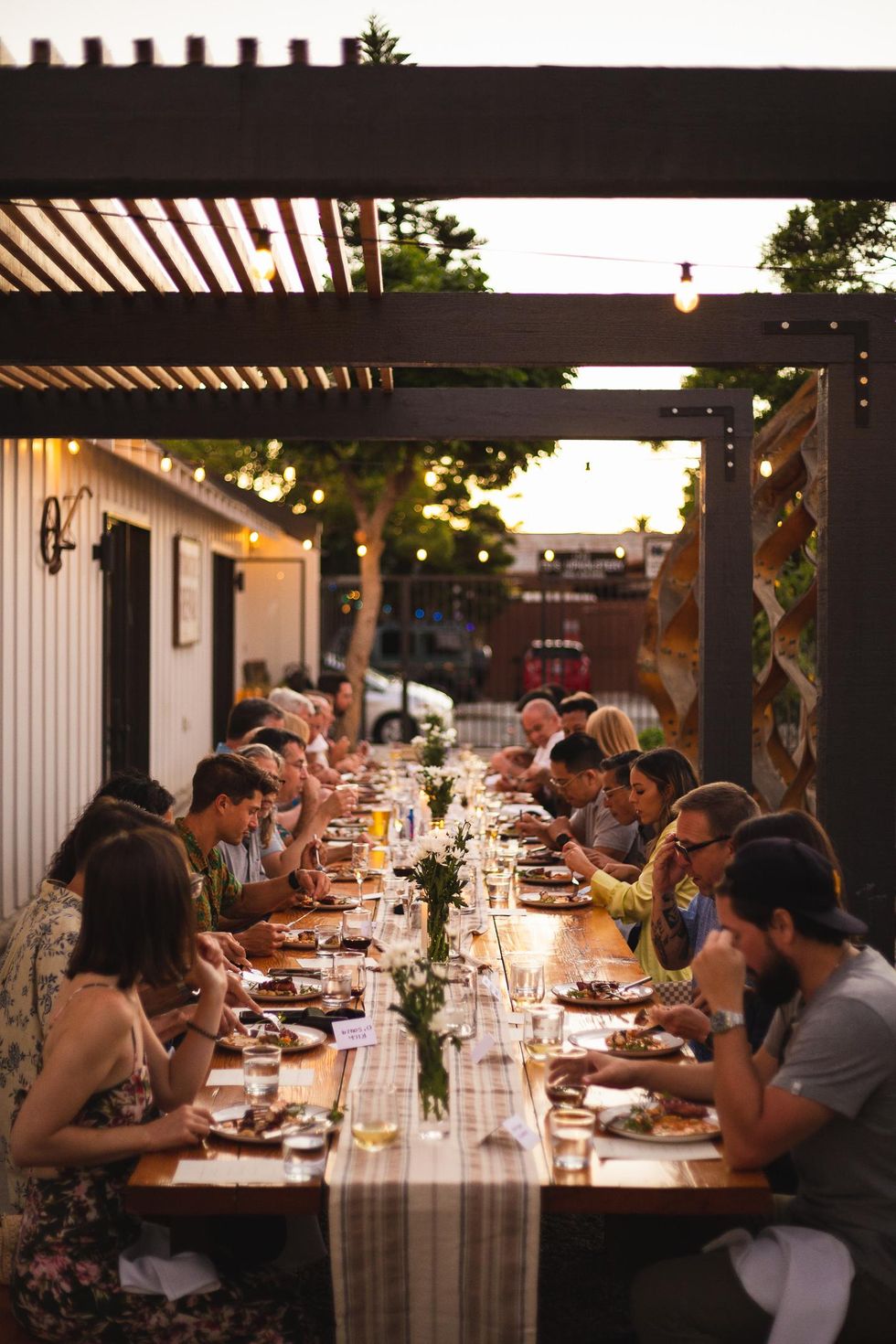 In Long Beach, California at Heritage, the land and its bounty serve as the centerpiece for the zero-waste restaurant’s dinner series that is located on an urban farm just a mile from the main restaurant. “We wanted our guests to be able to enjoy this tranquil escape in the middle of the city without throwing a huge event,” Co-owner Lauren Pretty says. “For our first dinner series, we collaborated with some local chefs using produce from Heritage Farm and created an evening that can only be experienced once.” While some dinner series are recurring and run for a limited amount of time, others are completely one-off, adding to the energetic, can’t-miss-it quality of the whole thing. “Since our dinners are in collaboration with other local chefs, we open a limited number of seats to allow for an intimate setting with a special, curated menu,” Pretty says.

That’s the thing about a really great supper series—it’s dinner that feels like theater. Immersive, magnetic, memorable, and perhaps most importantly, connecting. “It doesn’t matter what part of the world we come from, we eat. We dine with people we love and we even dine with people we don’t love,” Balogun says. “It is one of the things we share as a people on this planet. I’m trying to tell a story of my experiences in Nigeria through food and hopefully at the end of the day we discover we are all the same people and we are just trying to spend time with the people we love.” 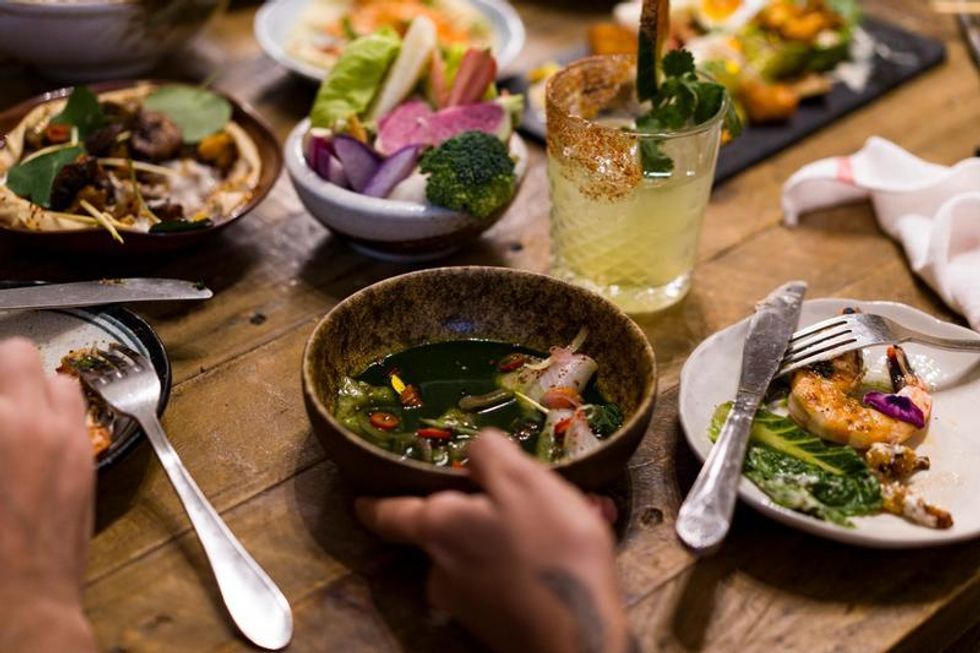 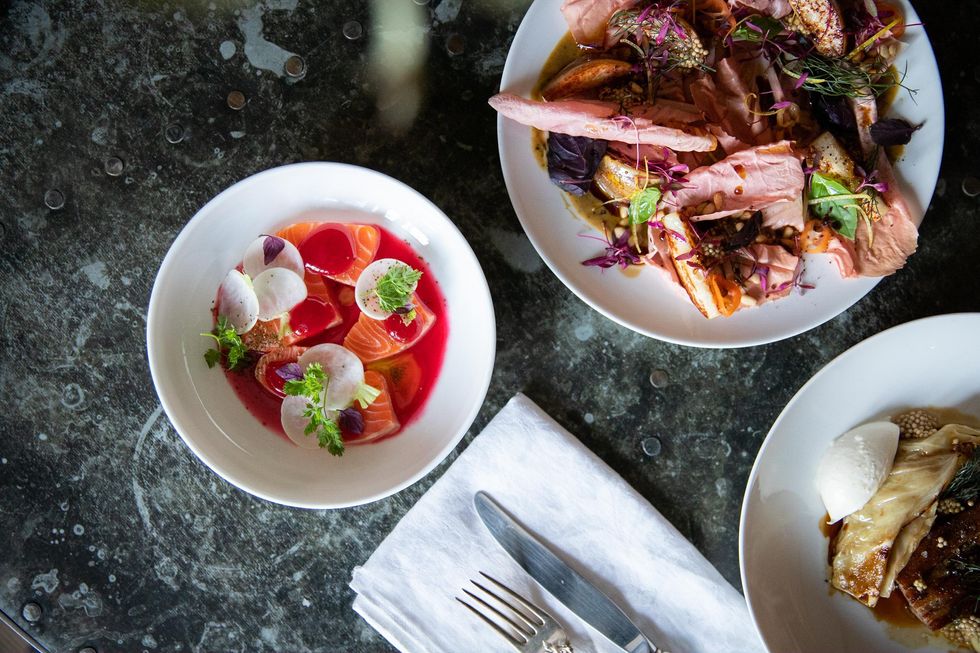 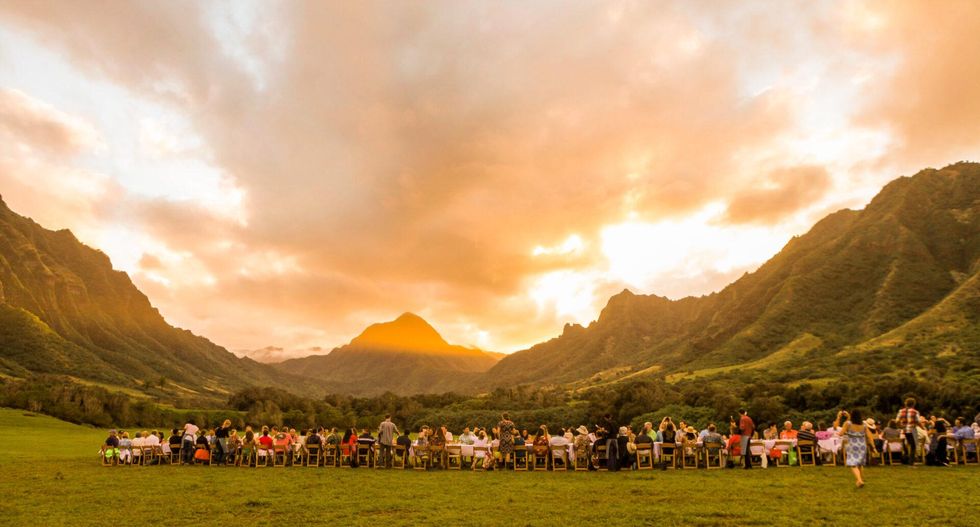 Photo: Courtesy of Outstanding In The Field

You may have missed

My Beauty Habits with Lex Gillies

A Prayer for Guidance – Your Daily Prayer

We use cookies on our website to give you the most relevant experience by remembering your preferences and repeat visits. By clicking “Accept All”, you consent to the use of ALL the cookies. However, you may visit "Cookie Settings" to provide a controlled consent.
Cookie SettingsAccept All
Manage consent

This website uses cookies to improve your experience while you navigate through the website. Out of these, the cookies that are categorized as necessary are stored on your browser as they are essential for the working of basic functionalities of the website. We also use third-party cookies that help us analyze and understand how you use this website. These cookies will be stored in your browser only with your consent. You also have the option to opt-out of these cookies. But opting out of some of these cookies may affect your browsing experience.
Necessary Always Enabled
Necessary cookies are absolutely essential for the website to function properly. These cookies ensure basic functionalities and security features of the website, anonymously.
Functional
Functional cookies help to perform certain functionalities like sharing the content of the website on social media platforms, collect feedbacks, and other third-party features.
Performance
Performance cookies are used to understand and analyze the key performance indexes of the website which helps in delivering a better user experience for the visitors.
Analytics
Analytical cookies are used to understand how visitors interact with the website. These cookies help provide information on metrics the number of visitors, bounce rate, traffic source, etc.
Advertisement
Advertisement cookies are used to provide visitors with relevant ads and marketing campaigns. These cookies track visitors across websites and collect information to provide customized ads.
Others
Other uncategorized cookies are those that are being analyzed and have not been classified into a category as yet.
SAVE & ACCEPT